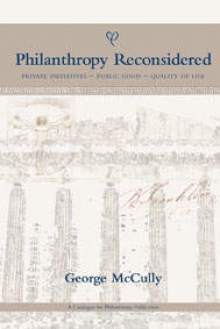 There is a certain type of book on philanthropy, written by North American authors, that ought to carry a sticker on the cover for UK readers ‘Warning: the assumptions in this book could seriously damage your health’. As the majority of serious books on philanthropy are published in the US, this column has dealt with this issue before and will no doubt face it again. Yet the assumption that philanthropy was, if not invented, then at least perfected in the US, still takes me by surprise.

Last summer I spoke at a conference after an erudite and respected American academic presented historical research which ‘revealed’ that European nations also enjoyed high levels of voluntary activity in the same era that Alexander de Tocqueville famously celebrated the distinctive contribution of voluntary organisations to American democracy. It took a half-hour paper, and presumably many hours of research to prove what anyone on this side of the Atlantic could have told her for free! It took all my powers of restraint to resist beginning my talk, “And now, I’d like to present proof that the Pope is indeed a Catholic”.

This is by way of protracted introduction to the key flaw of McCully’s otherwise quite innocent and occasionally illuminating book. If you do not accept that American philanthropy is “the strongest in the world” or that it has developed “its fullest and deepest historical expression” on that continent, then prepare for regular moments of book rage as such sentiments pop up with regularity across the 100 or so pages.

For readers unperturbed by, or able to overlook, this unfortunate patriotic tic, the book has a number of arguments that are worth exploring. The author’s first career as a scholar focused on the era from the Renaissance to the Enlightenment is put to good use in his examination of the roots of ‘classical philanthropy’. McCully points out it was historically typical for philanthropy to enhance the quality of life of both benefactors and beneficiaries. This not only casts fresh light on contemporary debates about the ‘dangers’ of donor benefit, but also offers a far richer conceptualization than what he terms, “anemic modern interpretations of philanthropy as ‘rich helping poor’, or ‘caring’, or simply ‘giving’”.

This point is advanced in the second substantive section of the book when McCully introduces a cast of key late eighteenth century ‘philanthropic characters’, to advance his thesis that the American Revolution was “conceived, planned, organized, funded and implemented” as a philanthropic project. This claim is over-stated and under-substantiated: the fact that the first President, George Washington, signed his letters ‘Philanthropically yours’, is as likely to indicate his devotion to the institutions of philanthropy as any other letter writer means to advertise his or her personal sincerity.

Despite these unnecessary distractions, which should have been lost in the editing process, there is nothing wrong with the thrust of McCully’s overall project: to reconnect modern philanthropy to its classical roots. In fact, the whole book was worth reading for the re-telling of a story that is nearly three centuries old, yet still serves as a good explanation for the role of philanthropy in many donors’ lives today. In 1710, Cotton Mather conjured up the image of having two oars in the water, with one oar representing a person’s vocation or ‘day job’ and the other oar representing their efforts to do good work in the world. As McCully concludes, “either oar alone will have us rowing in circles, whereas if we row through life with both oars we shall get to Heaven”.

The second half of the book examines the ‘new paradigm’ of philanthropy, driven by information technology, globalization and changing demographics of wealth. Yet despite the ‘newness’ of these external factors, and despite McCully’s insistence that they add up to create a ‘paradigm shift’, it is difficult to avoid the power of Mather’s simile resounding through these later pages.

Contemporary donors are still trying to work out how to combine mundane economic success with their aspirations to change the world, and still often choose philanthropy as the way to keep their personal boat afloat. McCully describes new and emerging donors as those who “turned restlessly to philanthropy as a next step in their careers, to gain a larger sense of the meanings of their hyper-productive lives”. In other words, the Masters of the Universe are searching for the other oar. Continuity, not change, is the most convincing theme of this small but ambitious book. If only it hadn’t ended with one more flourish: “Americans are known to be the most generous people on earth”. Warning! UK reader alert!