Philanthropy in Europe: A rich past, a promising future (2008) 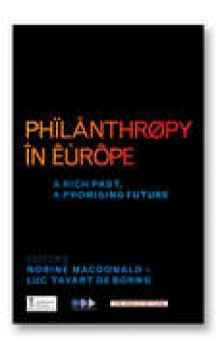 The aim of this interesting book is to raise awareness of the rich history of European philanthropy, in particular of European charitable trusts and foundations, and to discuss issues concerning its future development. The editors, Norine MacDonald QC, president of the Gabriel Foundation, and Luc Tayart de Borms, managing director of the King Baudouin Foundation, point out that the spotlight falls all too frequently on US philanthropy, from which it is often thought that European foundations derive their inspiration.

As Philanthropy in Europe admirably proves, this is far from being the case. It remains to be seen whether this will change in an increasingly global world. My own view is that it will, although readers will be in no doubt by the end of this book that European philanthropy is independently prepared to surge forward.

After an editorial commentary, which emphasises the role of foundations in European societies past and present, and the challenges and opportunities that lie ahead, thirteen profiles explore the history, current position and influence of one foundation or philanthropist in penetrating depth, followed by six essays on the current role of European foundations, the need for change and the path forward. The contributors are all influential figures in the philanthropic world and their chosen subjects are wide-ranging including, for example, the sixteenth-century Italian Compagnia di San Paolo, the Polish Stefan Batory Foundation and the Swiss philanthropist Stephan Schmidheiny. UK readers may be particularly interested in the chapters on Wellcome Trust and Impetus Trust.

The editors divide European civil society into four categories: the Anglo-Saxon model, the Rhine model, the Latin/Mediterranean model and the Scandinavian model. The different approaches to philanthropy that are followed within each model are well illustrated in the thirteen profiles. The UK, it seems to me, is well positioned somewhere between the continental European models and the US, in the sense that it can benefit from developments that occur in both systems either side of the Atlantic. This book will greatly assist the general understanding and appreciation of the role of European foundations and how we can work together in advancing towards united philanthropic goals, while not being blind to US initiatives.

The thirteen profiles embrace an underlying theme of the development of civil society from religious beginnings, resulting in the bedrock principles of democracy, the rule of law, market economy and civic participation. This increasingly depends on co-operation at an international level.  When, for example, the visionary industrialist and philanthropist Robert Bosch died in 1942, his estate was bequeathed to alleviate “hardship and promote the moral, physical and intellectual development of the people”. This was to be fulfilled through the promotion of “health, education, talent, international understanding and the like”.

The profile of the Robert Bosch Foundation, written by David Watkiss, explores how the donor’s intent is currently being achieved through programmes that include raising public awareness of science, promoting dialogue between researchers and journalists and strengthening relations between Germany, France, the US, Turkey and Japan by encouraging co-operation and communication between emerging leaders.

Another profile that alludes strongly to the principles of democracy, the rule of law and civic participation is Dianna Rienstra’s  chapter on the Stefan Batory Foundation. Her contribution describes the role of this organisation in facing up to the challenges of returning Poland to a civil society in the 1990s, not an easy task according to this fascinating account.

The case for European nations working together for philanthropic progress is clear, and well argued in the six essays that conclude this book. I know from my own experience how often cross-border problems with tax relief inhibit philanthropy, both in charitable giving and non-profit operations. I therefore found myself cheering wholeheartedly when I read Gerry Salole’s essay on the need for a European foundation statute, which would, I presume, cover not only grant-making foundations, but all non-profits. This, as he writes, would eliminate many barriers to the flow of funds and operation – a view, which the editors of this book fully endorse.

Gerry Salole concludes: “We are confident that only by making the case strongly will we be able to achieve the final push that will see the merits of our case acknowledged, and the EU leaders definitively accepting the logic of creating a European foundation statute.” We’re right behind you, Gerry!

Thank you, Norine MacDonald and Luc Tayart de Borms, for this timely and valuable book.