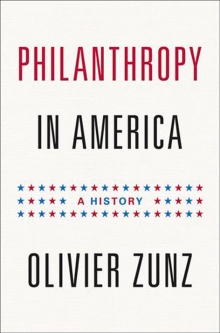 There are three kinds of book reviews that are tricky to write. The first is when the book is not very good and diplomacy is required to convey an honest account to readers without being unnecessarily unpleasant. The second is slightly harder to write, when the book is simply unexceptional – not bad, not good, so there is little to get one’s teeth into and offer comment on. But the hardest of all reviews to write, is when the book is so good that one is tempted simply to emit a long sigh of satisfaction and to repeatedly urge people to buy and read it at their first opportunity. This review is of that last kind, so forgive me if I struggle to do more than string superlatives together and seem to be on a percentage from the publishers (which I am assuredly not!).

Olivier Zunz provides a much-needed in-depth history of philanthropy (albeit one that is focused on the US rather than the UK) whilst also offering an argument that contemporary American philanthropy is distinctive because of the scale and open-endedness of philanthropic effort, such that foundations are established to “further the welfare of mankind”, rather than to tackle a narrow purpose or assist specific beneficiaries. Zunz argues that this “unlimited agenda of good work” makes American philanthropy so singular and significant.

Whilst Zunz’s core argument is that “the general purpose foundation was a genuine American invention”, the British reader cannot help but note a large number of other distinctions between the story told in these pages and our own national tradition of philanthropy. The key differential, it seems to me, is the larger role that private giving has played at pivotal moments in American history - such as the role of private funders in desegregation and Great Society programmes - as well as its contribution to global issues such as the founding and strengthening of Israel and the reconstruction of post-Communist states. However Zunz also draws attention to other ways in which American philanthropy has a bigger impact than this side of the pond, from the ongoing political intervention in defining the proper role for philanthropy, including major congressional and Treasury investigations, to the frequency with which leading players in Washington DC end up running foundations and vice versa (such as McGeorge Bundy who was a key figure in the JFK administrations before becoming President of the Ford Foundation and John Gardner who moved from running the Carnegie Corporation to setting up Medicare for the 36thpresident) – a quick review of the UK scene unearthed no similar high level job-hopping across political-philanthropic boundaries.

The amateur historian will find much to delight them in this opus, including tales of the ‘four minute men’ who pitched their appeal for funds during theatre intermissions, and the suggestion made to women to postpone buying new hats and give for the war instead: ‘Ladies, do touch up your old hats by moving around your birds of paradise’! Zunz also shares the fascinating tale of how Margaret Sanger’s birth control movement was funded by the man she married for his willingness to support her campaign, despite her withholding of ‘wifely duties’, and the techniques used by Zionist causes to solicit donations, including targeting Jews holidaying in Miami!

The historical detail is strongest in the chapters devoted to the early twentieth century, from the introduction of novel ideas such as postal seals to defeat TB in 1908 and the establishment of the first community foundation in Cleveland in 1914, to the fervent and widespread mass-philanthropy promoted by America’s involvement in both world wars, when most people had no direct contact with the frontline in Europe, and little alternative outlet for their patriotism except to support those who had been conscripted and fund humanitarian relief in war-torn countries. Zunz observes that wartime giving meant that “many Americans of modest means ‘learned for the first time the joy and dignity of giving’”. This wartime experience, when most Americans had nothing to offer but their money, helps to explain the deep-rootedness and extensive reach of American philanthropy, because “Giving became a symbol of American nationalism and a measure of citizenship”, and before long “a routine part of American life”. The charting of the history of fundraising alongside the history of philanthropy is a particular joy to read, as these two sides of the same coin are so often treated separately yet giving and asking are clearly closely intertwined.

Whilst Zunz does not shy from depicting the ‘darker side’ of philanthropy, including involuntary wartime giving when wages were deducted at source to meet corporate commitments, instances of abuse of funds by some foundations, and accusations that philanthropists became too ‘timid’ in the 1950s, he concludes that overall it is a progressive endeavour that has enlarged American democracy.

By way of offering some critique to balance the acclaim, it could be noted that Zunz has a tendency to dwell for too long and in too much detail on the mega-lanthropies such as Ford, Pew and Gates. Indeed the penultimate chapter strikes the only dud note in the book, offering nine long pages of intricate detail of Bill and Melinda Gates’ philanthropy, with no mention of any other philanthropic initiative in the 21stcentury. Gates is without doubt the most important individual philanthropist alive today, having distributed $26bn since 1994, but mass philanthropy remains more significant, as Americans collectively donated $290bn to charity in the year 2010 alone. As Zunz noted in an earlier chapter, philanthropy draws on “large subterranean pools of benevolence”. Whilst it in no way undermines the achievements of this book, nor should it deter anyone from dashing out to get a copy, this reviewer’s sigh of satisfaction would have been lengthened further if Zunz had applied his forensic analysis to the wider scope of recent years as well as that of the early twentieth century.