Philanthrocapitalism: How the Rich Can Save the World (2008) 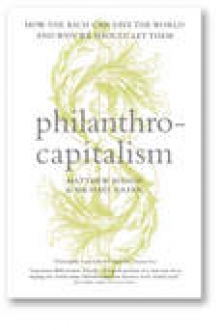 This book has the perhaps unique distinction of being the target of another book’s critique before it was actually published itself. The concept of ‘philanthrocapitalism’ was dissected in Michael Edward’s slimmer tome, Just Another Emperor? The myths and realities of philanthrocapitalism published in March 2008. Any reader who is interested in engaging with this important debate about the role, validity and potential for ‘businesslike giving’, can freely download Edward’s book, can read Philanthropy UK’s review of that book and can see Edward’s response to his critics, including our review.

Whilst this background reading may seem excessive, it will pay ample reward in setting the scene for the jungle into which Bishop and Green confidently stride, axe at the ready, to make light work of chopping down the pseudo-arguments and straw men that they feel populate their opponents’ writing. Where some critics worry about the self-interest and narcissism of ‘new philanthropists’, Bishop and Green focus on results; where some see celebrity involvement in social causes as self-promotion and the dumbing down of policy debate, this book hails ‘celanthropists’ for lending their brand credibility and communication skills to support important causes; and where, for example, Edwards ruminates on the incompatibility of love and the profit motive, Bishop and Green side-step such philosophical blind allies in favour of a more pragmatic ‘what-matters-is-what-works’ approach.

But readers with no appetite for wading into a tussle boasting heavyweights on all sides should not steer clear of this book on that account. Despite appearances, it is not a sustained polemic in the vein of Edwards’ pamphlet. Indeed, the arguments made in favour of philanthrocapitalism are not actually the most important reason for reading it. Rather, this book is an essential resource because it provides the most comprehensive and well-researched review of contemporary global giving that exists to date. Bishop and Green authoritatively map out the terrain of philanthropy at the start of the 21st century, contextualise that account within recent history and offer a balanced summary of the pros and cons of new developments, making space to air criticisms of the techniques, individuals and organisations that they ultimately endorse. The book also provides useful potted histories of many relevant organisations and extremely insightful pen-pictures of key individuals who are involved in contemporary philanthropy.

The authors define philanthrocapitalists as anyone who transfers skills and ideas used to pursue profit (such as a focus on results, leverage and risk-taking) to pursue social change, as well as anyone endorsing such ‘businesslike giving’ including celebrities, sports stars and royalty. This broad-church approach allows them to claim almost any significant figure in modern philanthropy as a congregant. Former President Bill Clinton is not a businessman and has no significant personal wealth to give away, yet he is described as “singing from the hymn sheet of philanthrocapitalism”. However, the authors’ even-handedness is evident when they note that the Clinton Global Initiative “attracts its share of chancers and self-publicists”.

There are two problems with this otherwise admirable book. The first is its ludicrously over-wrought sub-title: ‘How the Rich Can Save the World’. This unnecessarily provocative cover misrepresents the more measured tone and modest claims found inside the book. Not only has no donor ever asserted they can save the world, Bishop and Green themselves go to great lengths to emphasise that significant social change only occurs as a result of collaboration between philanthropists, governments, NGOs, businesses and citizens, with each aspect of any partnership playing to its own strengths, for example, “combining the innovation of the businessworld [and] the passion and humanity of the nonprofit world”.

The other flaw is the flight of fancy employed in the last chapter, set in 2025 at Bill Gates’ 70th birthday party, and celebrated in Richard Branson’s space mansion in the presence of a hologram of Andrew Carnegie with guests reflecting on a range of achievements brought about by businesslike givers, including peace in Darfur and the eradication of malaria. One part of this imaginary vindication of philanthrocapitalism involves the casting of Google co-founder Larry Page as the newly elected US President.

Yet reality trumps fantasy as president-elect Barack Obama is as sympathetic and knowledgeable a proponent for civil society as the White House has seen, which rather undermines the suggestion that plutocracy may be a price worth paying to harness the finest minds in search of social change. A more convincing closing point would have been a reiteration of Bishop and Green’s argument that the question is not so much whether the rich can save the world, but whether the obvious inability of those traditionally entrusted to do so (government, corporates and NGOs) implies a need to cease bashing rich donors in favour of helping them to achieve their potential to play a leading role in solving the biggest problems facing our world.

Regardless of your personal take on the merits of the movement described as philanthrocapitalism, this is a book that will earn its place on any bookshelf as a very useful resource on the ideas, people and organisations that populate the contemporary philanthropic scene.