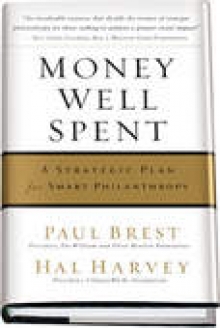 Money Well Spent is a handbook on strategic philanthropy, aimed at practitioners eager to create impact, rather than those interested in academic debates about the history, philosophy or practice of philanthropy. Its aim is to improve the giving of those who are already strategically oriented and to whet the appetite of others. The authors write from a US perspective but the lessons they distil are valuable to UK philanthropists and foundation staff who are interested in giving thoughtfully.

The book both describes and makes the case for strategic philanthropy. Much is written about the complexities of evaluation and the dynamics of foundation-grantee relationships, but in some respects it is more challenging to condense this knowledge into a briefing for those who want to know how best to do it in practice. The authors rise to this challenge, producing a book that is accessible to those new to the field whilst calling the attention of more experienced readers away from academic debates to essential questions about practice.

Strategic philanthropy, defined as philanthropy that is based on smart decisions aimed at creating impact, is the focus of the book, although the authors acknowledge that much philanthropy does not fall into this category. To be strategic a donor needs goals rather than mission statements, quantified where possible, to guide staff and applicants. When planning how to create impact, foundations should start by questioning their view of the problem and understanding its causes. For example, the authors suggest that philanthropists concerned with high levels of teenage pregnancy should question why teenage girls and boys are having sex and whether or not the pregnancies are intended. If they are not, do young people lack knowledge of contraception? Or is it that they cannot access it?

Similarly, foundations are encouraged to look for alternative solutions based on sound evidence as stock approaches do not always hold the solutions: ‘to someone with a hammer, every problem looks like a nail’. Smart philanthropists should test the logic that underpins their plan to achieve impact and track the progress of grants in order to make corrections based on what they learn.

Whilst reluctant to be prescriptive, the authors are clear that there are better and worse ways to do things. For example, foundations should avoid encouraging applicants to invest time and energy into a proposal only to turn them down for reasons that could have been known at the outset. Backing up their argument that foundations should disseminate their experiences of failure as well as their successes, the failures cited in the book are instructive and particularly motivating, such as a support programme for young people at risk which, when evaluated, was shown to increase offending, alcoholism and employment problems.

Brest and Harvey argue that quantitative measures can be useful to illustrate potential returns from philanthropy, to help foundations allocate funding between programmes and to think more clearly about the impact of their work. The authors argue for a ‘return on investment’ mindset, but acknowledge that some types of impact – such as campaigning for rights or trying to change social attitudes – do not lend themselves easily to quantification. It would be a shame if overzealous application of such evaluation tools resulted in philanthropists focussing solely on impacts that are easy to measure or in making fruitless attempts to quantify the unquantifiable.

For UK readers, the book challenges the typical grant-making practice of short-term project funding, and encourages a presumption in favour of general operating support provided over a long period. Foundations with broad interests but few staff should acknowledge their lack of specialised expertise by making unrestricted grants and trusting their grantees’ strategies. The authors also ask readers to be disciplined in the face of key strategic challenges that foundations face by focusing (because it is better to do fewer things well rather than many things badly) and persevering (because a field rarely changes as a result of a handful of three-year grants).

Money Well Spent also looks at specific tools that philanthropists can deploy to achieve their goals: mission-related investing; research and development; supporting social enterprises; influencing government, individuals and business; and building fields and movements. It also explores the choice of vehicle for conducting philanthropy and the trade-offs involved in ‘spending down’ versus maintaining an endowment in perpetuity. A central message is that “those who seek change should bear the burden of proof” rather than act on faith alone. Smart philanthropists’ actions should be led by evidence, not just hope. Beneficiaries need philanthropists who can create impact and make a difference to their lives, rather than just act out good intentions. Brest and Harvey’s book is a worthwhile read for philanthropists wishing to do just that.