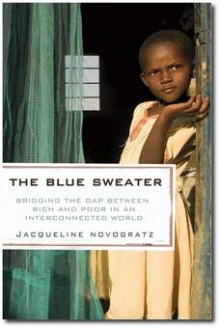 This book, written by the founder of the trailblazing venture philanthropy Acumen Fund, is categorised by its publishers as a ‘Memoir’ and marketed as “part coming-of-age story, part blueprint for effecting real change”. Autobiography is a tricky genre at the best of times and can make the most self-effacing author come across as a self-centred companion. When the subject matter of the book is ostensibly about improving the lot of the poor, an ‘all about me’ focus could be even more jarring. So I am relieved to report that Novogratz relates her personal journey in a way that enhances her central message and avoids unduly irritating the reader. Her message is that market-driven solutions can offer sustainable solutions to entrenched poverty. Whilst this is a commonly expressed view today, this ground was in part broken by Novogratz who set up microfinance programmes and helped poor women to launch profitable businesses in Rwanda. The story is also set in a variety of other African towns and cities, as well as in India and Pakistan; the portraits of their landscapes, inhabitants, colours, sounds and smells are so vividly evoked that the reading experience is almost 3D.

This travelogue style is adroitly used to confront the reader with more challenging issues. For example, a key theme is the tension between deploying compassion or intellect to change the world. Fresh out of a career in international banking, Novogratz sides firmly with the latter, confident that “the developing world need(s) management skills… not just people with good intentions”. This quote typifies her frequently dismissive approach to ‘traditional charity’, which she felt “often lacked clear measures and accountability and seemed at times more focused on making donors feel good than on effecting change”. She is clearly frustrated by donors who are motivated by “a few good stories” to offer sticking-plaster solutions instead of using data-driven strategies to make systemic change. Yet after two decades of working alongside the poor, learning to listen and being inspired by individuals such as John Gardner and a Buddhist monk named Maha Ghosananda, she comes to acknowledge that changing the world requires both heart and head: “There had to be a way to combine the power, rigor and discipline of the marketplace with the compassion I’d seen in so many of the programs aimed at the very poor”.

After 20 years of working for the UN, the World Bank and the Rockefeller Foundation, Novogratz concludes that there is indeed a way to combine ‘power and love’, but it requires nothing less than the reinvention of philanthropy. Her decision to pursue solutions that “lay between the market and the traditional philanthropic model” is embodied in the organisation that she went on to found. Her determination to ‘change the face of philanthropy’ is undoubtedly audacious and a vignette reveals the depth of her disquiet at what went before, describing a wine-fuelled brainstorming session to name the new organisation which includes the suggestion: “Ain’t your Grandma’s Philanthropy”. Given that the Rockefeller Foundation (founded in her great-grandparents’ generation) funded the development of what was eventually called the Acumen Fund and provided one of the fund’s first multi-million dollar commitments, this is perhaps an unfair sentiment.

Novogratz also makes immoderate criticisms of those who fail to join her in rejecting ‘traditional charity’ and persist in ameliorating symptoms rather than tackling root causes. Whilst systemic change is clearly an essential factor in eradicating the inequalities that exist in our world, I am not sure it is necessary to censure those who try to do good in less ambitious ways. Giving a hungry man a fish is not an act that stands in opposition to teaching him how to fish, nor does it prevent others from ensuring that the waters in which he fishes are unpolluted, to use Novogratz’s extension of the well-known Chinese proverb to encapsulate the Acumen Fund approach.

Feeding people, empowering people and providing ‘patient capital’ so that businesses can serve the poor, are all acts that exist on the same compassionate spectrum. Some people may only possess sufficient resources to contribute to short-term fixes, but this makes them fellow travelers, not the enemy, of those who are fortunate enough to command the resources required to effect long-term solutions. It may be true to state that “generosity is far easier than justice”, but any approach that dismisses generosity or disparages the instinct to help makes me nervous, and fearful that the brave new world of philanthropy could become elitist, accessible only to those with enough time and money to engineer systemic change.

Ironically, Novogratz’s central criticism of traditional charity for creating unbridgeable worlds between donors and recipients, with all the inevitable power dynamics that entails, is at odds with the book’s dominant metaphor of ‘the blue sweater’. As a child she donated a favourite jumper to a ‘Goodwill’ collection, only to spot it many years later being worn by an African boy. Whilst this experience does indeed illustrate how we are all interconnected, and how our actions touch people across the globe, it is surprising that this act of traditional charity – of a rich American donating cast-off clothing to the unknown poor – is her catalyst for action.

Whilst the idea of a blue sweater crossing continents does not accurately encapsulate her approach to international development, it does serve as a useful prop to engage readers in Novogratz’s call for action. It also enables her to tell a far more complex and timely story about the need to rethink capitalism so that it is more creative and inclusive, and able to tackle, rather than further entrench, the global poverty in which we are all – however unwillingly – interconnected. It is a story that is worth telling, and well worth reading.