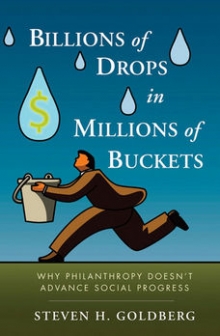 Hunters of ‘silver-linings’ have been thick on the ground during the current recession. This book comes from the ‘it’d be a shame to waste a good crisis’ school of thought, arguing that hard times ought to encourage increased efforts to help more donations flow to the highest achieving charities. Goldberg believes that donors need help to tell the difference between effective and ineffective non-profits, and he has a plan to attract third-stage funding to those organisations that are successfully tackling ‘$100m social problems’, by means of a virtual non-profit stock market called IMPEX (Impact Index).

Goldberg believes the notable absence of performance driven philanthropy means that a better deployment of funds is more urgent than increasing the overall amounts given. Under current conditions, he argues, “Charitable donations find their way to grantees through a haphazard combination of luck, charisma, and razzmatazz that is poorly suited to the importance of their work.”

The pace of Goldberg’s argument is slowed and weakened by fifty pages documenting the ‘foreclosure of the American Dream’, which contends that the failure of ‘anaemic’ governments leaves philanthropists with the responsibility to finance solutions to America’s current extensive social problems.

The refusal to countenance tax funded, state-organised solutions is perplexing to those of us who, on the whole, enjoy the fruits of well-funded social, education and health services. Goldberg is on firmer ground when he describes the workings of global financial markets, how they function with the aid of professional advisors, sophisticated investors and market rewards, and how that set-up contrasts with the non-profit market. A bon mot worthy of mention is that, “smart money doesn’t wait for invitations to wine-and-cheese parties”.

Goldberg makes a convincing case that some kind of market mechanism is needed to improve the allocation of philanthropic capital. Citing Voltaire’s maxim, that “the perfect is the enemy of the good”, he offers a spirited attack on ‘measurement snobbery’ and makes the case that difficulties involved in defining and measuring socialimpact do not mean that such differences don’t exist and aren’t worth measuring.

Whilst it is clearly a ‘fool's errand’ to look for perfect measures of social impact, he believes any efforts to plug the ‘non-profit information gap’ and create signals that can move markets in the ‘right’ direction are worth it because, “it seems absurd to assume that philanthropically-minded people are indifferent to ‘how much’ good their money accomplishes”.

It is undoubtedly true that the current allocation of philanthropic capital is sub-optimal - pounds do not always follow performance – but the depiction of a non-profit market in which donors’ sole aim is to rationally allocate their gifts, lacks an understanding of the nature of philanthropy in which donations should enhance the welfare of both recipients and donors.

The author is a self-described ‘latecomer’ to the non-profit sector, which shows in his assumptions about why people donate. Much as donors want to see their money spent wisely, it is simply untrue to characterise all charitable donations as, “expressions of expectation about future organisational performance".

As Peter Frumkin has shown, philanthropy is simultaneously a way of meeting public needs and an expression of private values. Whilst philanthropists do hope to help create a better society, they also donate as part of a search for meaning and purpose in their life. Frumkin insists this latter function is “part of the core rationale for philanthropy”; Goldberg is either oblivious to this fact or refuses to accept it is an essential driver. Goldberg writes dismissively of fundraisers, their focus on building personal relationships with donors and their tendency to tell engaging stories rather than hard facts.

But it is impossible to extract the flow of philanthropic funds from the web of personal experiences and relationships. Donors often support charities because of interconnections with their own autobiographies – they helped a close relative, they emanate from a shared set of religious beliefs, their efforts are allied to the donors’ life experience and so on. It is unlikely (even if desirable) that funds will be diverted away from these highly personalised connections to a system of allocation based on impersonal estimations of value.

Whilst better allocation of philanthropic funds is an uncontroversial aim, once the book gets into the detail of what this would involve (“the IMPEX would publicise the markets, including opening and closing dates, contract definitions, trading rules, method for determining results, liquidation values, and other important terms of participation”), one senses a major underestimation in the author’s acknowledgement that, “it is safe to assume that this will be easier said than done”.

Given that this plan will only cover a fraction of charities and a fraction of philanthropic money, the overheads seem excessive. Who will organise and sponsor the IMPEX? Why will the time spent on this activity be any less draining or less of a diversion from the ‘real job’ of nonprofits than fundraising?

Goldberg barely examines the merits of alternative options that are currently available, such as his brief reference to “the heroic research team at New Philanthropy Capital”, whose research reports already help donors interested in getting bigger bangs from philanthropic bucks by evaluating the performance of non-profits operating within a given sector.

No-one disputes that donors could make ‘better’ choices and that a shift from loyalty-based to merit-based philanthropy is logical. But I suspect Goldberg’s objective – to “transform the chaotic non-profit funding circus into an exact science that would perfectly match non-profit performance and funding” - will win many supporters, but few takers.