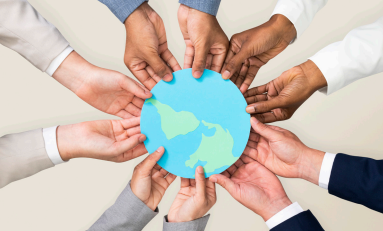 This article was originally published in Philanthropy Impact Magazine Summer Issue 27 Part One, ‘Transition to Net-Zero and Concomitant Issues’.

Insights from our new sector survey show that there is a vital role for philanthropic funding in recognising the importance of environmental action and giving it the stability needed to really make a difference.

As trustees of the UK Environmental Funders Network, we have watched the climate and ecological emergency unfold with a mixture of fear, fascination and hope. Fear, because unless we act decisively and act fast, there is a likelihood of further, rapid, and extreme climate breakdown. Fascination with the tools being developed in response, including the concepts of just transition, net zero and what these mean to different constituencies. Hope, because around the world, countries, companies and communities are acknowledging the urgency of the planetary health crisis we face.

Anyone reading EFN’s latest survey of the UK environmental sector, What The Green Groups Said (WTGGS), will feel these same three emotions in bucket loads. The 116 groups who completed the survey range from large international NGOs to grass-roots campaigns. The full results offer a fascinating insight into the world views and daily operations of very different organisations, who vary in their priorities, tactics and even their understandings of what ‘winning’ means.

Whatever their niche in the ecosystem of environmental groups, survey respondents have common hopes and fears, relating to the effectiveness and sustainability of their own organisations and the movement more broadly, and to the shifting external context affecting their work. Put simply, the hope is that broader and bolder environmental movements can sweep away inertia and incrementalism; the fear is that the energy will dissipate and the best intentions run aground in the face of business-as-usual (whose well-resourced defenders are honing their own versions of net-zero reality via the ‘discourses of delay’).

Here, we unpack two core themes at the heart of the survey – income and impact – and ask ourselves, what does it take for funders to help build a movement powerful and nimble enough to outrun the fear?

Enough to go round?

It has long been known that environmental and climate issues receive a much lower fraction of philanthropic giving than they truly merit, given their relevance to other topics, from geopolitical security to public health. In the reasons to be hopeful category, two thirds of survey respondents managed to increase their incomes over the last two years, despite the pandemic, and most describe their current financial health as good.

However, though targeted at a relatively representative sample of 450+ UK environmental groups, the 116 organisations that chose to respond to the survey are not necessarily representative of the sector; it stands to reason that those struggling for resources might not have felt able to spare the time to respond. In fact, the 43 organisations that answered this survey and a previous one in 2017 actually saw their income drop 7 per cent in real terms.

In total, respondents reported a combined environment-related income of £730 million in their previous financial year. When we consider that half of this was received by just the six largest respondents to the survey, it begs the question of whether there is enough money to go around in a sector that we believe requires a diverse ecosystem of organisations to be effective.

How does trust and foundation giving fit into the picture? At 13 per cent of all income reported in the survey, foundation grants are spread widely and thinly, being proportionately more important to those organisations less able to access individual giving in the form of donations, membership fees and legacies. Indeed, an uptick in individual giving was cited by some groups for helping them through the pandemic, although the rise in living costs may be testing the generosity of these donors now.

This points to a more structural problem with the funding of environmental groups – it tends to be short term, never enough and never very certain. Foundations have heard repeated calls to supply more unrestricted, long-term grants, but our respondents do not feel the situation is improving.

Of course, the sector’s impact is inseparable from its income. Change takes time, and it is difficult for organisations to become effective and stay effective for long enough, without access to the right quantity or quality of resources.

We see this play out when survey respondents voice their hopes and fears about the sector’s recent successes. Youth climate strikers and other movements have switched more of the public on and stretched the political space available for climate action. More traditional campaigners and advocates have seized this space for net-zero legislation and done heroic work on a raft of post-Brexit legislation at the same time.

However, pride in these successes is tempered by doubt that these measures are not in themselves ambitious enough hand that they will not stick due to weak implementation. Environmental groups urge their peers to ‘be bolder’ in their asks and in holding decision-makers to account.

To build its power, respondents want to see the sector form stronger collaborations, to communicate better with non-traditional audiences (“we are talking to ourselves”, as former Greenpeace director John Sauven writes in the report foreword), and to improve its diversity, equity and inclusion more broadly.

How can funders help? Most obviously, by providing more money, more flexibly, over longer time periods. This survey highlights how low, unstable income bases deter strategic planning, suppress recruitment of skilled staff, and hollow organisations out. Moreover, the constant scrabble for funds feeds a tendency for groups to compete rather than collaborate.

Survey respondents also want funders to finesse the way they fund too; for instance, urging donors to be more proactive in supporting collaboration, by carving out more dedicated resource and creating the conditions in which joint planning and action can flourish.

EFN has a role to play, too, and actively dedicates time and resources to help both funders and environmental groups increase the amount and quality of funding that is flowing into the sector. At a time when multiple, interlocking environmental crises are unfolding, from biodiversity collapse to climate change to plastic pollution, we think this work is incredibly important.

In all, the survey speaks volumes about a sector that is trying to change itself from within, as well as surf the waves of hope and fear for the future. With climate change already manifesting in natural and human disasters, in turn affecting socio-political dynamics, the stakes are high and the challenge to funders is clear – if we look to environmental movements to help make change happen, our responsibility is to ensure they are adequately resourced.

Learning Opportunity in Climate + Philanthropy - begins 27 September 2022
The EFN have put a test group through the Active Philanthropy and Philea's new Climate + Philanthropy: A Compact Learning Journey, and have found it to be useful resource. It's designed for foundation staff, trustees, donors and advisors who want to take an active role in integrating climate change into their grant making (or advising), regardless of their current focus (or if they are new to funding altogether). It explores the fundamentals of climate change, the impacts of the crisis on your philanthropic work, and opportunities to drive change. No prior knowledge in sustainability or climate is needed, and if you already have some experience in these topics you’ll be able to gain new insights into the role of philanthropy in addressing the climate crisis.

The course takes place over eight weeks, with participants completing one easily digestible and interactive online module per week. Over the two months, you will also come together for five online peer-exchange workshops to get to know one another and discuss the course learnings.

The EFN think it's a fantastic, unique resource, and highly recommend it to those of you who are new to climate philanthropy, or who want to learn more. The course begins on 27 September, 13:00 - 14:30 BST with the first workshop, and concludes w/c 21 November with a session that will provide space for participants to discuss what the results of COP27 (taking place in Egypt 6-18 November) mean for them.

For further details, please see the course website and the prospectus. To book for the September cohort, please sign up here using the discount code 'efndiscountseptember2022'. For any queries, please contact Jane Cabutti jane@greenfunders.org