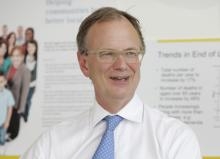 Tom Hughes-Hallett, who is stepping down after 12 years as chief executive of Marie Curie Cancer Care to devote more time to encouraging philanthropy, previously enjoyed a 25-year career in the City, latterly running Fleming’s global securities business. Since he first had contact with the charity world, Tom’s passion and level of involvement has grown ever greater.

Following the takeover of Flemings by Chase Manhattan in 2000, Tom was faced with a dilemma: “I was suddenly confronted by the fact that I probably didn’t have to work again, but I was 47 and full of energy.” A move to a full-time role in the charity sector seemed the ideal solution: “My wife said to me, ‘Why don’t you make the evening job the day job, because you seem to enjoy it a lot more than the day job?’

Although he is clearly driven by his passion for the causes he supports, Tom is also pragmatic and admits that his awareness of the tax incentives for charitable donations has added an extra impetus to his giving. “There was no question that I was to some extent tax driven in my motives. Particularly with the money that I was getting in bonuses and then the money I got when Chase took us over, the sheer pleasure of being able to direct it myself rather than giving it all to the Chancellor was a motivating factor.”

As well as his full-time role with Marie Curie, and his non-executive roles with GOSH and the Michael Palin Centre, Tom has set up a family charitable trust – the Emily Hughes-Hallett Trust, named in memory of his daughter. Because of the diversity of his charitable activities, Tom gives in a wide range of ways. He gives his time, energies and expertise to Marie Curie through his day job, and to GOSH and the Michael Palin Centre through his board roles with both. In terms of giving money, he mainly uses the Emily Hughes-Hallett Trust. In addition, Tom gives shares every year to add more money to the pot, using his own rough formula to calculate how much: “Each year we look at the performance of my own investments the previous year and if the mark to market is higher than the previous year I will give away that amount of money into the foundation… if the portfolio goes up from x to 1.1x, I give away 0.1x in shares.”

He sees this as an efficient and long term way to keep his philanthropic capital coming: “If you like it is painless when the market keeps going up, because it is not money I’ve ever had. It is incredibly tax efficient because then there’s no capital gains tax paid and I offset it against income tax.” And this calculation of how much to give has a crucial result: “It creates fun, because it is fun giving away money. Something we don’t talk about enough in this country. It is fun!”

An important aspect of philanthropy for Tom is the potential he sees for showing his peers how and why getting involved with charities can be rewarding: “I talk quite a lot to City people about jumping ship, so I probably see someone every month…I do talk a lot about the Emily Hughes-Hallett Trust to my friends, particularly the ones who’ve been lucky as well.”

However, he admits that there can be difficulties when trying to be open about philanthropy. “I don’t think any of my friends have any idea of the magnitude of what I’ve given away and nor do I have any idea of the magnitude of what they have given away. That is a pity, in a way. There must be some clever way of doing it, without us all feeling shy and embarrassed.” Tom thinks it might help if the focus were more on the causes people believed in, rather than the amounts being given. “If I wanted to try through my own experience to put pressure on my friends, rather than saying, ‘I’ve given away…’, I could say, ‘The Michael Palin Centre is the most important thing in my life and two years ago I helped to keep it afloat, and I regularly give a percentage of my income to it.”

However, he does offer a note of caution. In the development of the “market intelligence” sector for charities we must remember that the two are not the same: “The difference between being a fund manager and someone who’s giving their money away is that in the latter case there is the personal emotion.”