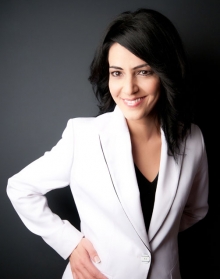 Raised in a traditional Indian family Kavita Oberoi, the founder and managing director of the successful IT and Business Healthcare Consultancy Oberoi Consulting, credits her attitude to giving to her father’s endeavours. He arrived in England in the 1960’s with nothing and built a successful business through hard work and determination. It is for ‘philanthropy’, rather than for business, that he is remembered: “My father would give to everyone in the community; shopping – even giving our fridge. He was a very successful man but it was for the giving of his time and acts of generosity that his community remembers him.”

Oberoi was the first woman in her family to gain a university degree and be allowed to work, and credits her mother with giving her the determination to seek an education.

As her success in business grew, Oberoi received various awards, including the NRI Pride of India Gold Award in recognition of her achievements and, in 2009, she was named in the HBOS report as one of ‘Britain’s 100 Most Entrepreneurial Women’.

Her passion for empowering women and girls developed alongside her business success, but a turning point in her life was appearing on Channel 4’s Secret Millionaire, and being inspired by a meeting with the founder of a charity that aims to influence government policy on the rights of disabled people to an education .

The experience led to Oberoi donating her money and her expertise, and she is now Chair of the Global Girls’ Fund (GGF) that is seeking to raise £10m to support international Girl Guiding and Girl Scouting. It is dedicated to empowering all girls and young women to reach their full potential and take action to change the world for the better. Since 2010 the fund has raised £4m of its projected target.

Oberoi has now turned her attentions to encouraging and promoting philanthropy within BME communities. “Traditionally and culturally, Black and Asian people have given time and money through their church, temple, communities, personal networks, and from personal experience. They may not even have considered this as philanthropy. What I have learned through my experience as a Chair is, like in business, fundraisers need to understand what makes givers tick. We need to make a start and get communities involved and show the results and impacts of giving to get more Asian and Black people interested in giving.”

Oberoi recently chaired the Diversity and Action Group as part of the UK Government’s Giving Summit. “What emerged was the lack of trust and prejudice that exists both within BME communities and for funders. There are barriers, and a sense of isolation, and we need to help break these down – how do BME organisations make ‘the ask’, and how do we get Black and Asian donors more involved?

“Challenge is good,” says Oberoi. “I have learned a lot myself and my own journey has been very organic, it is a step-wise process.”

Kavita Oberoi is founder and Managing Director of IT and Business Healthcare Consultancy Oberoi Consulting and has a range of other business interests. Her philanthropic interest is inspiring and motivating young people, businesses, women in business and business start ups to reach their true potential. Oberoi is a Patron of Burton College and in 2011 joined the Derby Renaissance Board, helping to develop and influence a sustainable community strategy for the city of Derby.

A 2020 vision of environmental philanthropy