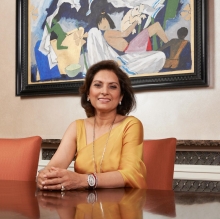 Personal story
Anita’s grandfather was a doctor in India, and it was he who first inspired her interest in philanthropy. That philanthropic passion blossomed while she was a student at Delhi University, where she worked in a crèche with young children from challenged backgrounds.
This inspired Anita to spend time supporting local and international charitable causes, and these experiences crystallised into a desire to support and empower women with her philanthropic work. She made the decision to focus on art and sport, two of her great passions, and two worlds in which women have historically been grossly underrepresented.
The culmination of her lifetime dedication to philanthropy was the founding of Mrs Choudhrie’s own charity, Path to Success, which became a registered British charity in 2005. She later founded the Stellar International Art Foundation, with the aim of redressing the imbalances of gender and ethnicity in the art world.
Path to Success was conceived as an umbrella charity, focussing on education and disability and each year selecting a different cause to lend its support to. An early recipient of Anita’s support was the Amar Jyoti Trust, a school for disabled children that was founded in Delhi in 1981, and which Anita has been a patron of for more than twenty years. The school started under a tree in a backyard with only thirty disabled students and able-bodied students from underprivileged backgrounds. In 2006, Anita organised the schools’ visit to the UK during their International Tour ‘Celebrating Abilities, Glimpses from the Epics’.
Anita organised events at the House of Commons and Leicester’s Peepul Theatre which raised more than £65,000 for the Amar Jyoti Charitable Trust, funds that were used for the construction of additional rooms for a brand new school wing and rehabilitation centre, and the purchase of crucial new equipment for the school. Path to Success continue to support Amar Jyoti, which is now a school of more than 300 students. Mrs Choudhrie has also adopted the Amar Jyoti Wheelchair Basketball team, providing funds for wheelchairs for its students.
Path to Success’s next flagship campaign was “60 for 60”. Launched in honour of her Majesty the Queen’s Diamond Jubilee, the campaign sought to provide sixty specialised wheelchairs to sixty NHS hospitals across the UK. The campaign attracted the patronage of Miriam Gonzalez Durantez, the wife of then deputy Prime Minister Nick Clegg, subsequently raising more than £120,000 and surpassing the initial target by providing a total of 83 wheelchairs.
More recently the focus of Path to Success’s work has been disability sport. In 2017 the charity announced its support of the London Titans Wheelchair Basketball Club, organising a corporate wheelchair basketball challenge that raised £42,000 towards the purchase of customised wheelchairs and training equipment. Anita was struck by just how poorly some of the disabled athletes she met were funded and decided to create a new campaign to solve this issue.
On International Women’s Day in 2018, Path to Success declared its Appeal: ‘Empowering Female Athlete in Disability Sport’ on their Path to Tokyo 2020 and beyond.  The campaign supports twelve disabled female athletes who dream of competing for GB in the Paralympics but do not qualify for central sports funding.
The campaign encompasses four leading disability sports: wheelchair basketball, para badminton, wheelchair tennis and para powerlifting. The support the athletes receive from Path to Success helps them cover the cost of coaching, training, travel, equipment and allows for the purchase of specialised sport wheelchairs.
Women’s sport is growing in profile in the UK, but women in disability sport still suffer from severe lack of funding and poor media exposure. Despite their prominence in their respective sports, some of the athletes Path to Success represents were forced to self-fund from their disability allowance and pension pots before being supported as part of the Path to Tokyo 2020 programme.
The charity’s next challenge is to use its success as a springboard to inspire a new generation of female Paralympic stars. Young disabled women are still physically the most inactive group in the UK, and Mrs Choudhrie’s hope is that the success of Path to Success athletes in Tokyo can help to inspire more girls to take up sport.
Anita’s philanthropic interests are not solely confined to sport, and she has always been passionate about supporting and creating new projects that empower women and artists from disadvantaged backgrounds.
Her Art Foundation, Stellar, consequently features work from a vast array of individuals with diverse understandings of the world and champions artists regardless of background or gender. By collecting European, Russian, American and Indian Art and distinguishing its selection less on regional concerns and more on artistic talent, the Foundation has been able to champion overlooked artists and give them a well-deserved voice.
Stellar’s exclusive events also provide necessary platforms for conversations on diversity and equality. Each year Stellar invites one female artist to speak on how her own artwork has been shaped by issues of culture and gender. With a shifting political landscape and campaigns for female empowerment across the globe, the work Stellar does is therefore exemplary not only in the art world, but on wider issues of gender equality and cultural acceptance.
To find out more about Anita Choudhrie, please visit: https://www.pathtosuccess.org.uk/