Expert opinion
The average UK charity fund returned 5.7% in the quarter to 30th June 2018, compared with a return of -4.2% in the previous quarter, driven largely by strong equity market performance.
According to the latest Teknometry CIG Charity Fund Universe Report, the average charity fund has also generated a return of 6.2% over the last 12 months, which is up from 1.9% for the 12 months ending 31st March 2018.
The average fund in the universe holds around 70% of their assets in equities and most of the major markets posted negative returns for the first quarter. By contrast, the second quarter saw global equity markets make a strong, if somewhat volatile, recovery and the average fund provided strong, positive returns.
The average fund is derived from a universe consisting of 1,295 multi-asset investment portfolios supplied by leading investment management firms and representing assets worth £14.5bn at the end of the quarter.
Over the longer term, the average fund, shown as the horizontal line in the middle of the bars on the chart below, has continued to show positive returns in each of the past 5 calendar years.  On an annualised basis the average fund has returned 7.9% over the past 3 years and 7.7% over the last 5 years. 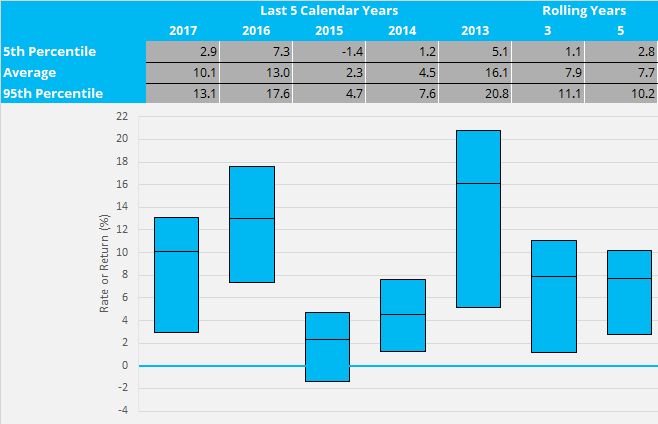 The top and bottom of each bar represents the 5th and 95th percentiles to provide a measure of the spread of returns in each period, excluding any outlying returns.
Income Yield
As can be seen from the following chart, the income generated by the average fund over the past 12 months remains around the 3% mark, as it has for the past 4 quarters.

Asset Allocation
Over the past year allocation levels in the main asset classes have remained relatively stable with the average fund investing around 70% of their assets in equities, 10% in bonds, 5% in property, 4% in cash and 11% in alternatives or other assets.
Risk
The risk measure used for the Teknometry CIG Charity Fund Universe is volatility, which is a statistical term that measures the variability of a sample.  The volatility is best measured over longer periods to provide a reliable number of observations and over the past 5 years the average volatility of the universe was 5.8%.
The following chart shows risk versus annualised return for the universe sample over a rolling 5 year period.  The universe is centered on the intersection of 6.5% volatility and 6.75%pa return, illustrating the tightly bunched nature of the investment the multi-asset portfolios. 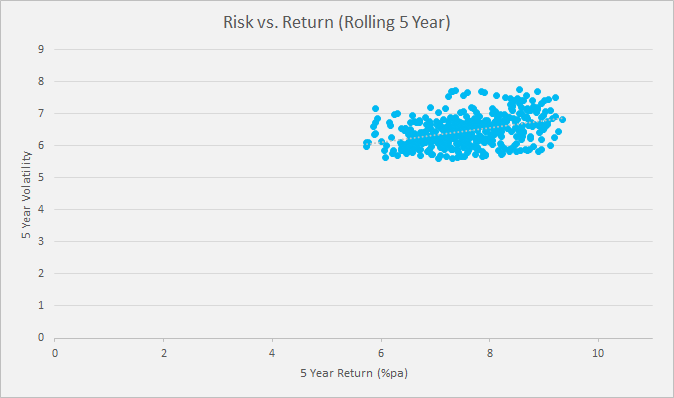 Risk (rolling 5 year volatility) has remained relatively stable over the 7 quarters that the universe has been operating, ranging from 6.4% at the end of 2016 to 5.6% last quarter, which is consistent with the stable asset allocation.
Universe Composition
The 1,295 charity portfolios in the universe cover a range of sizes from £1m to over £500m.  Around 60% are under £5m, 30% are between £5m and £20m and 20% are over £20m.  The total of the assets in the universe is £14.5bn.
Return data is supplied net of fees and various checks are carried out as the data is submitted to ensure consistency and validity of the data.  The average return used is an equal-weighted measure (i.e. a simple average).
Portfolio data is uploaded via an online portal, which facilitates the validation and correction, before it can be submitted for inclusion in the universe.
The following investment management firms submit their charity portfolios for inclusion in the universe:
• Brewin Dolphin
• Cazenove Capital
• CCLA
• Investec
• Newton Investment Management
• Quilter Cheviot
• Rathbone Investment Management
• Sarasin and Partners
About the Teknometry CIG Charity Fund Universe
The Teknometry CIG Charity Fund Universe was established, in conjunction with the Charity Investors Group, in 2016 and the founding investment management firms each provided 5 years of data going back to the start of 2012. Now in its second year, the Teknometry CIG Charity.
Fund Universe is the most comprehensive peer group of UK charity funds in the multi-asset sector and is the only one to provide statistics on return, asset allocation, risk and income yield.
The Universe can be used as a peer group comparator to show how a constituent portfolio compares against the universe, across a range of measures.
UK registered charities can subscribe to the quarterly reports free of charge via the Teknometry website.